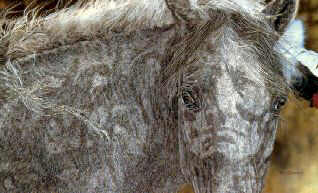 On June 25, 1876, Red Horse, a Minneconjou Lakota head chief,
rode under Lamedeer, into an unexpected fight with Custer. In the
ravines and on the ridges along the Little Bighorn River, Custer and
his Gray Horse Troop met their fate.

Despite instructions to wait for reinforcements, Custer inexplicably divide
up his command and proceeded to attack. Because he had , for uniformity
of appearance, given each company of the 7th Calvary its own individual
color of horses, Gray Horse Troop of Company E became the most
prominent, the most noticeable, the easiest to follow through the action.
It is the big gray horse that run through Indian accounts of the battle.

When Custer and his men were surrounded, the remaining grays were
released or broke away where the stampeded through Indian lines and
were captured near the river and taken to camp, hence, the gray horse,
once a soldier's horse, pictured in " Red Horse ".

Although no photographs exist of the famous battle, Red Horse's
recollections of the battle do, rendered in brilliantly-colored drawing
depicting all phases of the action.